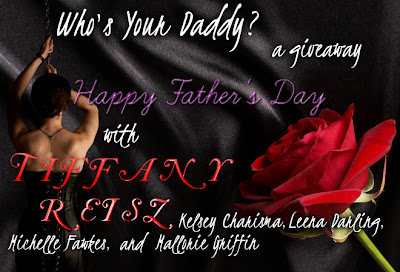 My father and I have a really good relationship. Before retiring from serving the police force for over twenty years, he was a substitute history teacher and he’s always been a bit of poet. He taught me to think for myself and gave me a deep appreciation for history, reading, and writing. And in honor of all the fathers in the world or those that have filled the very big shoes that role requires, we’re celebrating Father’s Day with a week-long giveaway.

Tiffany Reisz is the bestselling author of The Original Sinners series from Harlequin’s Mira Books. The Original Sinners series is a dark, edgy, erotica about a famous author with an alternative lifestyle. And the first book in the series is a modern-day retelling of My Fair Lady. Coincidentally, this also happens to be one of my favorite musicals—with its own focus on daddy-kink.

Tiffany will be stopping by the blog for an interview this week to talk with me about the upcoming release of The Mistress.

The Mistress is available for pre-order and will be released July 30th, 2013. It’s the explosive ending of the series and it picks up right where book three left off—a cliffhanger that has left fans gritting their teeth and wanting for more. Nora Sutherlin is in handcuffs, held captive by two men. Under different circumstances, she would enjoy the situation immensely, but her captors aren’t interested in play. Or pity.
As the reality of her impending peril unfolds, Nora becomes Scheherazade, buying each hour of her life with stories-sensual tales of Søren, Kingsley and Wesley, each of whom has tempted and tested and tortured her in his own way. This, Nora realizes, is her life: nothing so simple, so vanilla, as a mere love triangle for her. It’s a knot in a silken cord, a tangled mass of longings of the body and the heart and the mind. And it may unravel at any moment.
But in Nora’s world, no one is ever truly powerless-a cadre of her friends, protectors and lovers stands ready to do anything to save her, even when the only certainty seems to be sacrifice and heartbreak. 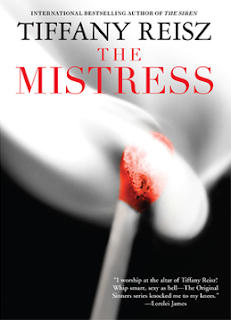 For a chance to win these great prizes, please comment on this blog post with why your father (or someone who has fulfilled that role) is important to you. Also, be sure to list youremailaddress(at)yourprovidername(dot)com so that I can contact you when distributing prizes. Grand Prize winners will be contacted to obtain their mailing address so an autographed copy of their chosen book can be mailed to them. I will choose the most heartfelt responses and announce the winners on Saturday, June 15th.

Mallorie Griffin will also be stopping by for an interview on Thursday and her book Her Father, My Master will be FREE directly on Amazon.com starting the day of her interview here on my blog and through Father’s Day weekend.

Olivia slipped away in the middle of her father’s stuffy dinner party when his boss, the CEO, entered the bathroom, where she’d hidden to smoke a joint. With all the confidence of a man never turned down, he helped himself to more than the last of her stash. Content Warning: this short story contains adult material with explicit sexual situations and language. Full of hot, vigorous sex including drug use and is not for the faint of heart. All sexually active characters in this work are 18 years of age or older.