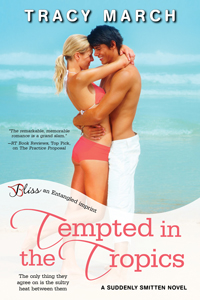 Tempted in the TropicsSuddenly Smitten Series

Book 2
Tracy March
Genre: Contemporary Romance
Publisher: Entangled Publishing – Bliss
Date of Publication: September 9, 2013
ISBN: 9781622661626
ASIN: B00EMTDMFA
Number of pages: 192
Cover Artist: Jessica Cantor
Amazon BN
Book Description:
The only thing they agree on is the sultry heat between them
Nothing’s more important to Paige Ellerbee than her struggling bakery, Sweet Bee’s. When Lane Anderson, the temporary new doctor hot enough to rival McDreamy, moves in next door, though, she’s sure things are looking up. Until he threatens her business in their first conversation.
Lane just wants to practice medicine responsibly—not argue with the flighty bakery owner next door. But when he finds himself traveling down to the Caribbean to play guitar for Paige’s best friend’s wedding, suddenly the sight of the blonde in a bikini eclipses the fact they can’t agree on anything. And as their vacation romance grows, his reservations about starting something after getting burned by love are washed away like sand on the beach.
But once Paige and Lane land back home, will these polar opposites be able to forgive their feud and find lasting love?

“You ready?” he asked.
“As I’ll ever be.”
They took the steps into the pool together, their feet disappearing into the black water, then their knees, up to their waists and almost to Paige’s shoulders.
“It’s warm.” She clenched her teeth as her feet sank into the muddy bottom of the pool. “And squishy.” She was surprised to see him looking as excited as a five-year old.
“I’d guess a hundred-one to a hundred-two degrees—with a high slime factor.”
“Ever said that to a patient before?”
He shook his head. “Not that I haven’t wanted to.” He grinned, flashing his dimples without a warning.
“One-hundred-and-one point six Fahrenheit,” the attendant said with a lilting island accent.
Paige imagined the woman could make a string of curses sound like a lullaby. “Your guess was pretty close,” she said to Lane.
“Pretty close? I was dead on.”
“Dead’s not a comforting word to hear from a doctor.” Paige splashed black water on his chest and watched, mesmerized, as the rivulets ran down his temptingly touchable pecs. She quickly snapped out of her daze when he dipped beneath the water, then came up with two fistfuls of mud and plopped the pitch-black slime on her shoulders. She gasped, grabbing his wrists, but not tightly enough to keep him from massaging the mud onto her skin. It happened so fast she didn’t know whether to be shocked, disgusted, or turned on. She settled for a little of each.
Lane shook the water from his hair, seeming satisfied. He looked even hotter all wet, if that was possible.
“Gross,” she said, even though she thought she might melt as his strong hands smoothed soft mud on her shoulders. She couldn’t wait for her turn to slime him.
“Medicinal properties,” he teased. “Remember?” After covering her shoulders, he swept his fingertips along her neck, taking his time and lightly swirling circles all the way up to her
earlobes. Her breath hitched. “I can almost stand it on my shoulders, but the squishing between my toes is creeping me out.”
With one swift move, he swept her off her feet and cradled her to his solid chest. Her stomach jumped into her throat. “Put me down!” She playfully flailed in his arms but he held tight.
“Do you want mud squishing between your toes or not?” His eyes glinted with mischief.
Paige realized she was a fool to keep fighting. Up-close-and-personal with his pecs was a pretty awesome place to be. She blinked the water from her eyes and looked up into Lane’s. He bent his head down and lifted her up so his face was just inches from hers.
Holy crap, he’s going to kiss me! Paige’s heart did a backflip. They’d already gone from truce to lip-lock?
“Better?” he asked, his breath warm and minty, his gaze fixed on hers.
For once, she was speechless, her pulse thrumming. After what seemed like forever, she found her voice. “A little,” she teased. “I’m still covered in mud.” Did she really want to kiss the guy who didn’t seem to care if she couldn’t make the rent on Sweet Bee’s next month? Besides, one kiss could make the rest of her time in St. Lucia really awkward. Or really incredible.
“Then maybe it’ll be a lot better,” he said softly, “if I do this.”
Paige tensed, still unsure about which way she wanted this togo. Her mind argued no while her lips screamed yes! He drew her closer for a moment…
Then unceremoniously dunked her into the water. 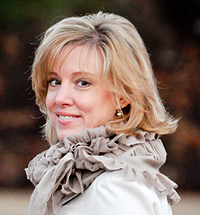 About the Author:
Award-winning author Tracy March writes romantic thrillers influenced by her career in the pharmaceutical field, and her interest in science and politics. She also writes lighthearted romances inspired by her real-life happily ever after.
Always up for travel and adventure, Tracy has flown in a stunt plane, snowmobiled on the Continental Divide, ziplined in the Swiss Alps, and been chased by a bull in the mountains of St. Lucia. She loves Nationals baseball, Saturday date nights, and Dairy Queen Blizzards—and rarely goes a day without Diet Coke and Cheez-Its.
Tracy lives in Yorktown, Virginia, with her superhero husband who works for NASA. They recently spent two years living in Washington D.C., and enjoy visiting often—especially when the Nats are in town.
Website: http://www.tracymarch.com
Facebook: http://www.facebook.com/pages/Tracy-March/151834621538910
Twitter: https://twitter.com/#!/Tracy_March
Goodreads: http://www.goodreads.com/author/show/4575285.Tracy_March