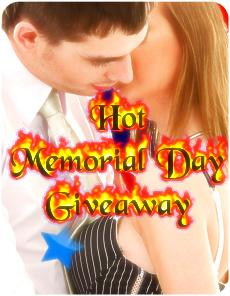 Heat up your Memorial Day with this sizzling Giveaway! Simply leave a comment on this post telling us who your favorite fictional romance hero is and what prize you’re hoping to win along with your e-reader device (whether you own a Kindle or Nook) for a chance to win the following fabulous prizes:
1) 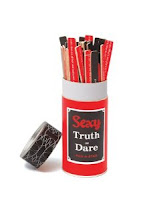 Pick-A-Stick with this sexy Truth or Dare game that features 100 seductions that will heat up any couple’s love life in the bedroom and beyond. The red-hot box comes with 50 sticks to be pulled one at a time, revealing a sexy truth on one side and a dirty dare on the other. The perfect gift for those looking for some naughty action, Sexy Truth or Dare is sure to inspire many passion-filled nights.
2)

One Kindle or Nook e-book copy of R.E. Butler’s A Twitch of Tail which is book six in the Wiccan-Were-Bear series. Natural witch Wysteria Brannick has a great life: a job she loves at the new were-animal hospital and a place in the Wiccan coven that resides in Cleveland. But all is not right in her idyllic life, as dreams of two mystery lovers plague her nightly. When she arrives at the were-tiger king’s home to heal a young tiger, she comes face to face with the two men from her dreams.

Were-tiger brothers Melo and Tahlon Thorne have spent the last three years in different ambushes. Now that Tahlon is coming to join Melo’s ambush, they both begin to grow unsettled. It’s not until they follow a sweet scent into the tiger king’s home that they realize the unsettled feelings are because they’ve found their mate. But Melo and Tahlon’s past comes back in force and it’s not just Tera’s life that hangs in the balance.

Be prepared for plenty of growling, love bites, hot were-tiger loving, and m/f/m interaction. This novella contains scorching hot sex, two possessive were-tigers, and the witch who loves them both.

One Kindle or Nook e-book copy of R.E. Butler’s The Wolf’s Mate Book 6: Logan & Jenna. Jenna Odile planned to spend the eve of her twenty-fifth birthday partying with her friends before she cast a spell to find her truemate. Before she can, she’s captured by a group of criminally-minded werewolves who want to use her fae-abilities to commit crimes. Poisoned and left for dead, she used the last of her strength to cast the spell for her truemate, hoping that he would find her before it was too late.
The last thing Logan Anderson wanted to do with his Saturday evening was watch over the young male wolves in his pack while they attended a dance in hopes of finding their mates. As the night wore on, he began to feel compelled to leave, and his instincts led him to race into the woods at the side of the highway. In the darkness of the woods, he finds a woman near death, who begs him to protect her. Now, nothing is more important than helping her get well. He’ll deal with those who hurt her… later.
This story contains a male werewolf with a dark past, a fairy who can’t wait to find her truemate, and the betrayal that brings them together. Features hot werewolf-fairy loving, mythical creatures, full moon madness, and lots of neck biting. Although part of the series it can be read alone.
Psst! Attention fans of R.E. Butler: If you’ve already read these two books you can choose any one title from her backlist.
4)

Kathy Kulig is giving away TWO e-book copies of Desert of the Damned the first book in her Demons in Exile series. While working on an environmental project in the Arizona desert, research scientist Amy Weston finds herself caught in the war between two men. Dante Akanto lures her into the desert to explore the dark side of her passions, pleasuring her in ways she never thought possible with his bizarre sex games. And park ranger Jake Montag has a compelling mysticism and powerful sensuality that’s impossible to resist. But the two men, demon and shapeshifter, are engaged in a supernatural fight between worlds. Amy and her high level of life force energy is the key. Dante’s world and his immortality depend on claiming her as his own. The choice Amy makes between the two men will affect both her world and her future. Reader Advisory: Contains scenes of mild bondage.

Robin Woods is giving away TWO e-book copies of The Unintended(2nd Edition) (The Watcher Series: Book One). “I tried to push him back, but he was too strong, like iron. Suddenly his head snapped up like he heard something; he craned his neck to listen and then he let out a hiss. He kissed next to my ear and softly whispered, “I think breaking you will be much more fun. I’ll see you soon.” And then he added, as if an afterthought, “Tell him hello for me.” Then I felt his mouth lock onto the base of my neck and something pierce my flesh. It hurt. Despite my panic, after a few moments, my heart slowed, and everything became distorted as the blackness came for me.”
After breaking up with her boyfriend, seventeen-year old Aleria “Ali” Hayes finally feels liberated. Unfortunately, her ex’s buddies are not making it easy on her. When his friends harass her one night, a mysterious stranger, Bowen, steps in to rescue her. But just as this new relationship seems to be taking off, Ali is attacked by something far worse than spiteful high school boys. When she awakes, her eyes are opened to a world where gods still walk the earth, where vampires and other immortals fight for supremacy—and where fate may be stronger than free will. Now, Ali must decide who she can trust, and whether the world of mortals is worth saving at all.
For New Adult readers that still love their YA Robin’s book delivers everything a paranormal romance should be.

Preceding her Memorial Day Sale that kicks off on Saturday, May 25th, Erica Stevens will be giving away TEN e-book bundles of the first three books in the Captive Series. Bundle includes Captured, Renegade, and Refugee.

Captured: Blood Slave. Captured, taken from her beloved family and woods, Aria’s biggest fear is not the imminent death facing her, but that she will be chosen as a blood slave for a member of the ruling vampire race. No matter what becomes of her though, Aria knows that she must keep her identity hidden from the monsters imprisoning her. She has already been branded a member of the rebellion, but the vampires do not know the true depth of her involvement with it, and they must never know. Though hoping for death, Aria’s world is turned upside down when a vampire named Braith steps forward to claim her. He delays her execution, but Aria knows it’s only a matter of time before he drains her, and destroys her. Especially once she learns his true identity as a prince within the royal family; the same royal family that started the war that ultimately brought down humankind, reducing them to nothing more than servants and slaves. Aria is determined to hate the prince, determined not to give into him in anyway, but his strange kindness, and surprising gentleness astonish her. Torn between her loyalties to the rebellion, and her growing love for her greatest enemy, Aria struggles to decide between everything she has ever known, and a love she never dreamed of finding. Book 1 of 4 This book contains some language, violence, and sexual situations. Recommended for ages sixteen and up.

April M. Reign will be giving away TWO e-books of Dhellia Has a Conscience: Book One, a hot Urban Fantasy. She may be the daughter of Satan, but DHELLIA has a conscience. She’s run away from Hell to escape her undesirable duties as princess of the underworld. A three-month road trip “upstairs” convinces her half-human side that Earth is where she belongs.

Unfortunately, Lucifer isn’t seeing things her way. Her brother, who is a soul catcher and her protector, snatches her away and hides her in the apartment of a bumbling wizard who casts a cloaking spell on her, and a geeky vampire rock ‘n roll singer who is allergic to human blood.
DHELLIA gets a job in a law office and suddenly, her future is full of possibilities—that is, until a collision of fate and destiny create the perfect storm, which puts her and her friends in peril. Once again on the run from Satan’s minions, Dhellia and her friends must find a way to survive while she discovers the powers that lie within her.
DHELLIA is a darkly funny, fresh and sassy, fast-paced series about a young woman whose birthright is the underworld—she’s mad as Hell about it, and is determined to beat the Devil at his own game!

Winners will be announced the day after Memorial Day. Follow me this week and get to know these authors as I interview them on my blog! Tomorrow I’ll be chatting with R.E. Butler on romance, writing, and books. Stay tuned 😉