The cat is out of the bag. Geek sex is wicked hot! Flirtation, foreplay, and terabytes of tension that make it impossible to put down this book. Moody, CEO, playboys like Gideon Cross don’t have anything on Sark. Very well-written and well-edited, this book is a must read. 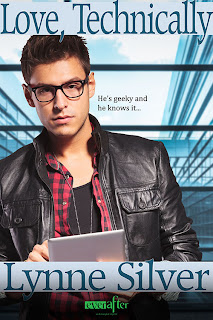 Love, Technically
Lynne Silver
Genre: Romance
Publisher: Entangled Publishing, LLC
Date of Publication: June 29, 2013
ISBN: 9781622662210
ASIN: B00DTDGJ64
Number of pages: 140
Cover Artist: Cover design by Libby Murphy.
Amazon   BN
Book Description:
Billionaire CEO and computer whiz Noah Frellish is a king among geeks. Women are attracted to his money, but he’d love to meet someone who’s actually interested in him. When he helps the sweet and sexy Michelle Kolson with a printing problem, she confuses him for a help desk technician. Noah knows he should clear up this case of mistaken identity, but would she still like him if she knew he was the boss?
Michelle thinks life in Chicago is perfect, as is the whirlwind romance with her smoking-hot coworker. When she unexpectedly finds her job on the chopping block and the man she fell headfirst into bed with running the company, will she abandon her dreams?
Noah must convince the small-town girl to stay in the big city—and that he really is the man she fell for.
EXCERPT:
Time for a last-ditch effort. If it didn’t work, she’d have to grab a flash drive and pay to print out the document at the twenty-four hour printing store near her house with money she didn’t have. She kicked the printer stand and caught it as it wobbled.
“That never works, but I appreciate the sentiment.”
She jumped and whirled around to see a young guy, looking nerdy in an endearing way. He wore a ratty black T-shirt with the words There’s no place like 127.0.0.1. She guessed it was a computer joke. Despite her confusion, she took note of the way the numbers spread across his wide chest, hinting at some interesting muscles hiding behind the geeky demeanor. She had to lift her chin to see his face.
“You startled me.” She placed a hand to her chest to calm down her wildly beating heart, which jumped thanks to being startled but also at her close proximity to a tall, handsome man. At least, she thought he was handsome. A baseball cap pulled low over his brow prevented her from seeing most of his face, other than a nicely squared jawline shadowed by a hint of a dark beard.
“Do you need help?”
“That would be amazing. I have to get my weekly time sheet and call log printed and on my boss’s desk.”
“Let me see what I can do, but for future reference, the help desk is always on call here.”
“Help desk?”
“The IT group whose sole purpose is to assist—”
“The office Luddites.”
He grinned. “You said it, not me.” He bent over the printer.
“I didn’t even know such a thing existed. It’s my first week here. My first week anywhere.” She blushed and tried to stop rambling.
He started to say something, then stopped and walked back to her desk to fiddle with her mouse. He spent a few minutes hitting buttons until he looked up and grinned. “I found the problem. Come with me.”
She followed him around a row of desks to another printer stand that was spitting out a sheaf of papers. She snatched at the pile to see that her document was there in triplicate. Her hand brushed his wrist as she reached for the paper, and then understanding of her silly mistake dawned. She flushed and wanted to hide. “I was sending to the wrong printer bank. I must not have heard it, since I was on the phone.”
He grinned. “Yeah. Easy mistake to make. I would’ve assumed the closest printer too, but now you know.”
“Thank you.” She stuck her hand out. “I’m Michelle.” She felt a bit foolish shaking hands as if they were being formally introduced, but she wanted an excuse to touch him, to feel his strong and capable-looking hand in hers.
a Rafflecopter giveaway 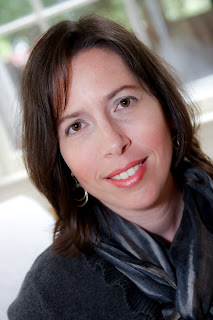 About the Author:
By day, Lynne Silver lives the suburban soccer mom life; volunteering with the PTA, doing laundry and working. By night she enters the sensuous world of alpha males and passionate heroines.
She calls the nation’s capital home and lives in an old fixer-upper with her husband and their two sons. When not writing romance, she reads it. Lots of it. Over and over and over again, preferably with a bag of M&Ms in hand.
She is represented by literary agent, Jessica Alvarez of Bookends LLC
Fun Facts about Lynne:
1. She has no sense of direction and could get lost on her way from the kitchen to the bathroom.
2. She grew up in Miami and is a huge Hurricanes fan. (The football team, not the natural disaster.)
3. Speaking of natural disasters…she lived through Hurricane Andrew, though her car and much of her house did not. To this day she is scared of storms and windy days.
4. Lynne eats a lot of sushi and considers herself a bit of a connoisseur. She and her husband considered writing a sushi guide at one time.
Website: http://www.lynnesilver.com/
Blog: http://www.lynnesilver.com/blog/
Twitter: https://twitter.com/lynnesilver
Facebook: https://www.facebook.com/LynneSilverAuthor
Goodreads: http://www.goodreads.com/author/show/4441166.Lynne_Silver
Amazon: http://www.amazon.com/Lynne-Silver/e/B004FQXSAE