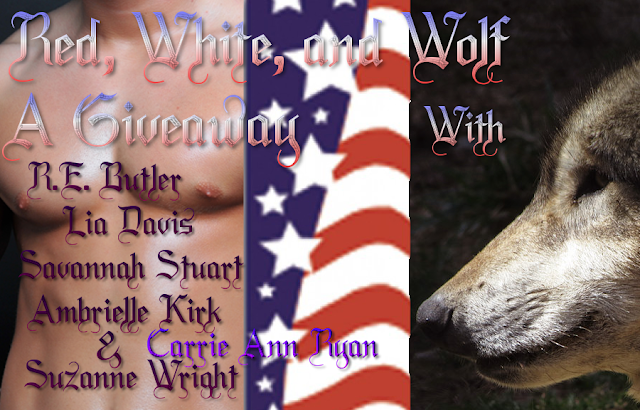 I’m celebrating the 4thof July with a Red, White, and Wolf Giveaway that’s sure to leave a bite. To enter simply comment on this blog post with your favorite element of werewolf mythology, your favorite fictional hunky wolf, and of course youremailaddress(at)emailprovider(dot)com so I can deliver prizes to winners. The giveaway will run from today through July 3rd, when I will announce winners on the blog. All week I’ll be chatting with the authors of these hot alpha heroes!

YOU could be one!

The Wolf’s Mate Book One: Jason & Cadence by R.E. Butler
For fourteen years, alpha wolf Jason has watched his partially-marked mate Cadence live her life without him. Circumstances force his hand and he must find a way to get her to uncover her buried memories of their past before someone else steps up to take her from him. For as long as she can remember, hybrid wolf Cadence has loved Jason with every fiber of her being, but he’s consistently shoved her away until the love that’s there is bound tightly in anger and shame. No one can take his place in her heart, but that doesn’t mean that there aren’t wolves willing to try. Will Cadence be able to get through Jason’s icy demeanor to the heart of the boy she’s always loved? Can Jason undo the past so they will have a future together? This book contains red-hot werewolf loving, plenty of neck biting, and misuse of a kitchen counter. The Wolf’s Mate is a book for mature audiences only and contains sexually explicit content.

A Tiger’s Claim – Ashwood Falls, #1by Lia Davis
As the Alpha’s only daughter Shayna Andrews has always been treated like a rare gem, protected like royalty, and she’s suffocating.  Her longing to be independent has driven her to sneak out one evening after dinner. After relishing in being able to run free without an escort, she finds herself face-to-face with the enemy, miles from home, and nearly loses her life until a lone wolf comes to her aid.
Travis Hunter’s main objective is to destroy the Onyx Pack—a group of drug using, murdering rogue shifters. His seek-and-destroy plans are put on hold when he rescues a female from a brutal attack. The beautifully exotic tiger shifter, Shayna, stirs a passion he thought died with his long-lost mate.
When Shay’s first heat cycle slams into her, Travis has no choice but to submit to her needs—and his own. But there is always a price to sleeping with the Pack princess. Not only will they have to face her Pack, Shay and Travis will have to deal with a mating that is beyond a single night and could have consequences more than either of them had thought. And when Travis finds out Shay wears the enemy’s brand, things will go from bad to worse.
Warning: One alpha female who doesn’t take no for an answer, a wolf with more on the line than just his heart, and a combustible attraction that’s sure to cause more than one sweaty night.

She’d fought fate against one, but she’s no match for two.
Senior enforcer, Cameron Nickels has found her perfect mate. Blaine Andrews, leopard Pack Marshal, is strong, dominate, loyal, and passionate. He knows all her strengths and weaknesses—not to mention her pleasure points. Cam’s known Blaine most her life, but she’s always felt like something was missing and her jaguar refuses to fully accept him. Yet, she can’t walk away from him. When architect and sexy mountain lion shifter, Graham Griffin, comes to town to design the new den nursery and school, Cameron finds herself in a mating dance that throws her and her jaguar into flight mode while Blaine must decide if he cannot only share his mate, but welcome another.
After his lover walked out on him a year ago, Graham has no intentions of entering another relationship any time soon. But he realizes that the fates have other plans for him when he meets Blaine and Cameron. When his ex-lover’s children are chased into Ashwood territory by a group of rogues, he discovers the male he shared a life with had died freeing the kids from the Onyx Pack. Graham must work side-by-side with the two enforcers to uncover lies from the past while his heart opens to his true mates.
Warning: Contains one-hot headed leopard, a man who thought he’d lost it all, and a woman who is about to rub up against both in the best possible ways.

Taming the Alpha by Savannah Stuart

After a year of lusting after his sexy employee, werewolf pack-leader Grant broke his no-involvement-with-humans rule and made a move on Talia. A month later the sex is still red hot and everything between them is perfect. Or so he thought. Until the night he shows up at her place expecting their usual ritual of mind-blowing sex and finds out she has other plans. And they don’t include him.
When Talia announces she’s tired of being his last priority, Grant realizes he might lose the only woman he’s ever cared about. He has to do something fast to fix their relationship, but she’s completely unaware that he’s not human. He’s not above using sex to bind her to him, but when she wants more than that he has a risky decision to make. If he admits the truth he risks not only his heart, but the safety of his pack and the existence of all supernatural beings as well.

When jaguar shifter Lauren Hayes breaks into an alpha’s home to steal back what rightfully belongs to her pride, she doesn’t expect to be tackled by Max McCray, second-in-command of the Kincaid wolf pack. As punishment for her crime the sexy wolf shifter demands that she stay with him for one week. Knowing she’ll start a war between her pride and his pack if she doesn’t, she has no other choice but to agree, even if the thought of being near him 24/7 makes her scared that she won’t be able to hide her growing attraction to him.

Now he has a week to make her his…

Max has waited months to make a move on the sexy jaguar shifter and now that she’s broken shifter rules, he’s not letting her go. He doesn’t care that he’s a wolf and she’s a jaguar, claiming her forever is the only thing that matters. Unfortunately, not everyone likes the idea of him being with a feline shifter. Max is forced to choose sides between Lauren and members of the pack he’s sworn allegiance to in order to protect the woman he knows is his destined mate.

Tamara would risk her life to gain freedom. She’s finally built up the courage to escape from a world of abuse by the hands of man who promised her the world. One night she makes a break for it, but her plans backfire. She begins to believe that she was never meant to be happy. When all hope of freedom fades, she stumbles across a wolf that brings her to safety. She learns to trust the wolf, but has yet to trust the man.

When female wolf shifter Taryn Warner first encounters Trey Coleman, an alpha male wolf shifter with a dangerous reputation, she’s determined to resist his charms. After all, Trey—who was only fourteen when he defeated his own father in a duel, winning the right to be alpha of his pack—can’t have anything to offer the talented healer besides trouble, or so she thinks. Taryn finds herself drawn in by Trey’s forceful demeanor and arctic-blue eyes, and she eventually agrees to enter an uneasy alliance with him. If the two succeed in convincing their respective packs that they’ve chosen each other as mates, Trey will win valuable political allies, while Taryn will escape an odious arranged mating.
But there are a lot of potential pitfalls to this plan—including the very real possibility that the wolf shifters, overwhelmed by their growing attraction to each other, will be unable to maintain the clear heads needed to pull off the deception.

Redwood Pack Volume 1 by Carrie Ann Ryan
Melanie is a twenty-five year old chemist who has spent the whole of her adult life slaving at school. Now she is finally done and about to start her dream job, however before she does that she needs to let her hair down. A blind date set up through her friends seems like the perfect solution. Melanie can now take one night off and let her inner vixen out. She can go crazy with a perfect stranger. But what happens when the man she is set up with is more than what he seems and Melanie finds herself wanting more that she thinks she is ready for?

Kade, a slightly older than twenty-something werewolf (by about one hundred years) who needs a night away from the Pack. Too many responsibilities and one near miss with a potential mate have caused Kade to search for some peace. One night with a human woman who is as sexy as she is smart could heal any doubts or troubles Kade has. But what happens when he finds this little woman could be his mate and for the first time Kade finds himself at a loss for words?

Are you hungry for some wolf? If you are… Tell us, what do you love about werewolves and who’s your favorite leader of the pack? And don’t forget youremailaddress(at)youremailprovider(dot)com so I can dish out these dreamy alphas. Leave your entry in the comments on this blog post 😉 Yahoooooooo!