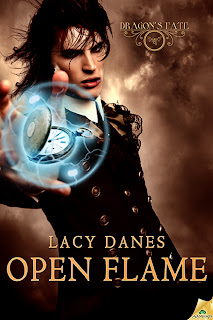 Open Flame
Dragon’s Fate Book 2
Lacy Danes
Genre: Paranormal romance
Publisher: Samhain Publishing
Date of Publication: September 24th2013
ISBN: 9781619217461
ASIN: B00CZ8MCHO
Number of pages: 118
Word Count: 32K
Cover Artist: Kanaxa
SamhainPublishing | Kindle| Kobo| Nook
Book Description:
Between hate and lust lies heaven, hell… and smoldering love.
Like his brothers, Madoc is a dragon born by blood magic. Unlike them, he has only once bitten a human in a near-hopeless quest to find his eternal mate. Watching that woman die nearly destroyed him.
Now he works to invent a watch that will rewind time. When he attends the Spectacle of Time in Paris, though, he finds a woman who shakes the foundation of his world and crumbles his ferocious control.
Ever since the black-haired man with the red crescent on his cheek ruined her family, Fina has hated him. When she runs into him in Paris, she is determined to show him just how much. Instead, overwhelmed by the desire to both kill him and bed him, her body betrays her and she melts in his arms.
Sparks fly, and—when his teeth sink into her skin—she ignites. But she can’t run far and fast enough to avoid the burning truth. She is now part of Madoc’s dangerous world?body, soul, and fire.
Warning: This novel contains explicit sex, time-shifting, distance-hopping, a super-hot dragon, and a woman who can take the heat.
Short Excerpt: http://www.lacydanes.com/books/open-flame/#read-an-excerpt
a Rafflecopter giveaway 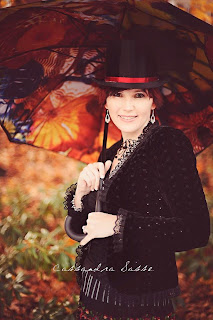 About the Author:
Lacy Danes made a New Year’s resolution to write a hot, historical romance. A year and a half later, she achieved her goal. She lives in Portland OR, where besides writing she enjoys horseback riding, gardening and savoring a great martini while watching the world go by.
Visit Lacy at her web site:
LacyDanes.com
http://www.lacydanes.com/
https://www.facebook.com/LacyDanes
https://twitter.com/lacyDanes
http://www.goodreads.com/author/show/137629.Lacy_Danes