Blurb: Warrior vampire Garrick Labar guards the secrets of the Guild. His comrade–vampire and sorcerer Ramon Travere–enforces the uneasy alliance between mortals and immortals. When Larissa Devine moves into town, both Garrick and Ramon are mesmerized and enraptured by her. They crave to claim her as their crimson swan and lover. But a new arrival is fair game and if they don’t claim her first, a band of renegades will.

“Anything missing?” Garrick asked.
Larissa shook her head then charged back downstairs. “Why would they just mess up the place without stealing anything?” Her throat tightened. “It’ll take me hours to straighten this up in time for opening tomorrow.” Tears filled her eyes.
“Kids,” he said. “The door probably wasn’t closed tightly and the wind blew it open. I’ll have Ramon take a look at it.”
“I should still call the police. The store was vandalized.”
“Don’t. I know the police chief. I’ll mention it to him tomorrow. If you call, you’ll only have a bunch of cars out here and the gossip will spread all through town. You don’t need that kind of publicity.” He started calling on his cell phone.
“Who are you calling?” she asked.
“Ramon and Jordan. I’m telling them to come over now to help straighten up. Between the four of us, we’ll get your place in order.”
“But it’s so late.” Her words cracked.
“They won’t mind.” He hugged her. “You’ll see. We all work together here.”
His embrace felt heavenly warm and safe, made her feel protected and a little turned on. Heat rushed to her face, embarrassed by her physical response to his touch. What was wrong with her? He was showing her kindness and she was getting horny? She pulled away, avoiding his gaze. “Thank you, Garrick. I’ll get started on the front display.”
Twenty minutes later Ramon and Jordan entered the store. “Ramon Travere,” he said by introduction, taking her hand and locking his gaze with hers with an obvious flirtatious up-and-down once-over. Ramon was striking and hot. A few years younger than she with long blond hair that fell past his shoulders. He wore leather pants and boots and a black T-shirt with a bright-yellow smiley face with the addition of devil’s horns and tail attached. Have a nice eternity was inscribed below.
If Garrick was the mysterious and muscular predator, Ramon was the sleek and wild rock star.
“Wow, you weren’t kidding, Garrick,” Jordan exclaimed. “What a mess. Any idea who did it?”
Garrick shot Jordan a glance and her eyes widened. “Doesn’t matter. We’ll get everything ready for you, Larissa. Thank you for hiring me. Garrick said you needed the help.”
Garrick’s expression revealed no clue as to who really arranged the employment. For a college student, Larissa expected Jordan to be younger but she had to be in her late twenties. Her blonde hair was fashioned in a perfect French braid. Her clothes were casual but obviously pricy designer wear and usually far out of a college student’s budget. There was no rich-girl-entitlement attitude, Larissa knew plenty of them in her college. Jordan appeared to be a pleasant, smart and polite young woman. “You’re welcome. I’m happy to have the help. I’ll start you with a few hours and when business picks up, we can add more. How does that sound?”
“Works for me,” Jordan said. “Tell me where you want me to start.”
While Larissa, Jordan and Garrick put the merchandise back in order, refolded and reorganized the displays, Ramon fixed the lock on the front door. The shock and fear of having her new store vandalized eased with the presence of the two men and even Jordan cast an aura of positive energy. Everything would work out well for her first day. The business would thrive.
“Finished,” Ramon announced. “You have a new Schlage deadbolt lock. If anyone tries getting in now, they’ll have to take down the door and frame with it. Want me to add strobe lights and security cameras, Larissa? I can rig some kind of metallic net to drop down and zap them.”
Larissa laughed. “No, the new locks are fine. Thanks. Send me the bill.”
He shook his head. “Garrick will take care of that.”
“That’s not necessary.”

Ramon walked up to her, took her hand in both of his and locked his gaze with hers. “I left my card on your cash register. If you ever need anything, just call.” His searing blue eyes had a mischievous glint and his lips twitched ever so slightly. Larissa felt her stomach tingle as if she were going down the big dip of a rollercoaster with her eyes closed and didn’t know if there was a bottom. Great, now she had the hots for two men? That had never happened to her before.
She tried counting back to when she last had a date. After four months she stopped counting. It was too depressing. No wonder she was responding to all the hot guys in New Hope. Maybe she should consider dating after her business got off the ground. After the holidays.
“Thank you, Ramon.” Her words came out in a breathy whisper. His name rolled off her tongue. He continued to hold her hand and a wave of dizziness passed through her. Closing her eyes, she hoped the sensation would pass. But then a flash of detailed images drifted through her mind.
She was in a large living room, a place she’d never seen before. Ramon stood naked before her in front of a blazing fireplace, the flickering light dancing over his body, reflecting over every cut and angle of his muscles. He was gorgeous and aroused, his cock hard and thick. His eyes glowed with an otherworldly blue glow. Holding out his hand to her, she stepped forward and noticed that she too was naked. The heat of the fireplace warmed her skin. She didn’t know why she wasn’t questioning the situation. She only knew it seemed right and couldn’t resist.
Lie with me. Ramon’s words entered her head but she didn’t see his mouth move.
Yes, she answered with her own thoughts as she took his hand. Gently, he lifted her in his arms and laid her on a thick fur on the floor. His body eased on top of her. Yes, this is so good.
Larissa. Garrick’s voice called her from a distance. The light from the fireplace highlighted his face. He was smiling despite the darkness in his eyes.
She held out a hand to him, asking him to join them. He nodded and the next moment he was naked and lying beside her too. Two men, amazing. “Garrick,” she whispered as his mouth came down on hers at the same time Ramon plunged his cock into her.
“Larissa!” Garrick shouted. She blinked and saw him standing beside the door to the storeroom.
Images of the old house, the fireplace and Ramon and Garrick making love to her vanished, yet her heart still raced. Her vagina continued to contract on empty space and her nipples bore stiff points through her sweater. She glanced at Ramon. Smiling mischievously, he stared at her through half-lidded eyes. “Are you okay, Larissa? You look dazed.” His mouth twitched in a wicked and mischievous grin.
“Yes,” she breathed. “I’m fine.”
“Everything looks in order in here,” Garrick said. “Please check on her tomorrow. Make sure nothing is missing. You can go, Ramon.”
Ramon straightened and nodded.
“Thanks for your help,” Larissa said. Her heart continued to pound and her body was still heated and aroused.
“My pleasure.” He turned to Garrick. “Night, Garrick.”
“I’ll be in touch,” he said. The moment they were alone, Garrick’s gaze swept over her in a spine-melting look that made her nervous and horny. “You still seem shaken. Don’t worry about the break-in.” 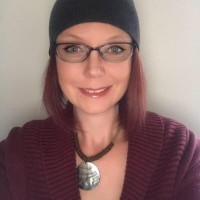 A.C. James resides in northeast Pennsylvania where she entertains her boyfriend who loves her imaginative yarns and quirky sense of humor. She spends her time drinking large vats of coffee while taming two toddlers by day and writing by night. Recovering video game beta tester and tech geek who grew-up going to cons and watching SmackDown. There’s probably some cosplay pictures around somewhere of her dressed up as Bloodberry from Saber Marionette J. Just don’t tell anyone.