So my favorite tweet of the week is coming a little late this week because of my Red, White, and Wolf Giveaway. Again, a-big-wet-frothy-lip-smacking thank you to all the authors and fans who visited my blog. And without further foreplay, my favorite tweet from last week goes to Chuck Wendig: 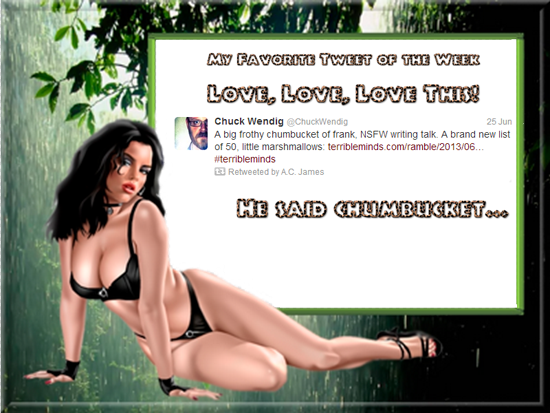 I’ll be honest though. I’m a big blog reading nerd like the rest of you and even without the tweet, I would have eventually found my way to his post—50 Rantypants Snidbits of Random Writing & Storytelling Advice. If you never read another piece of writerly advice grab a box of tissues or your favorite brand of urinary incontinence undergarments—you decide—and read this humor filled rant on writing do’s and don’ts. Well mostly don’ts but we all need a good kick in the ass every once in a while.

Amen to that.
And don’t ask me. I don’t have any either.
Eventually we all have to muck our way through writing, learning as we go (hopefully). The learning curve is different for everyone but in the end we all have to bear down like constipated rhinosand figure the shit out for ourselves.
A fully-fledged story will not appear on the blank page without clacking away at your keyboard until you get it right.
So stop staring at the blinking cursor and get on with it already.
Dig in. Deal with your shit.
No one has the answers but you. It’s your fucking story. So tell it.

Say what you mean. Period.

Yes, really. Be a word ninja. And stop bitching about why you don’t have time to write and fucking do it already. No one is stopping you. We all love to watch Game of Thrones. That’s why we all have DVRs. (Or we should anyway.) You could have five kids but it didn’t stop these word ninjas.

Honestly, in the middle of my Red, White, & Wolf Giveaway three things happened.
1) My daughter spiked a 102.1 temp. I had to take her to the doctor. It turns out she had a wicked ear infection.
2) My computer took a shit. That’s why scheduled blog posts are fantastic.
3) I was reading my Kindle in bed late Saturday night. My cat jumped up on my bed and curled in my lap and fleas jumped up along with him. Sunday I spent the entire day clipping my indignant cat. I’m sure there’s a pussy joke in there somewhere. Then I gave him a bath and promptly detoxed my whole house—bedding, curtains, & carpets complete with steam cleaning… just in case.
But all my blog posts went up on time. Why? Because I promised my readers a giveaway and I had six authors counting on me.
For the record I want to see a horror movie done black and white 1950s and 60s style with some motherfucking fleas. I swear just the thought makes you itchy and paranoid. The next day I woke up and my husband had spilled coffee grinds on the counter. I was smashing them like they were my arch nemesis with the soundtrack from the shower scene in ‘Psycho’ stuck in my head.
My point is that you need to set self-imposed deadlines and goals—then meet them. If you can’t work with yourself what makes you think an agent or editor is going to want to work with you?
So stop making excuses.
It makes you sound like an asshat.

I don’t own a fish tank. But there you have it.
There’s only so much writing advice you can read before you realize you have to just dive right in. You’ll dog paddle for a while and it’s not going to happen overnight but eventually you’ll do the butterfly stroke with the big fish.
Until then you can just freestyle. Whatever style—do it with conviction.
The only other remotely useful thing that I’ve learned is to say no. Say no to time sucks. Guard your time. There are about a gazillion things that will try to steal it from you. Yes, help others. But you can’t help everyone.
They have to muck through their own shit too.
Don’t feel guilty for saying no.
Or do… But say it anyway.

FAQ
Q: Why is there a busty chick framing Chuck Wendig’s tweet? I don’t get it.
A: This is a romance blog and I liked it better than the photo frame with the stiletto shoe.

What was your favorite tweet of the week? I hope everyone had a Safe and Happy 4th of July and that everyone has all of their limbs. I’m taking the weekend off people—no blog posts until Monday!