Caedmon Wolves
Volume I
Books 1-3
Ambrielle Kirk
Genre: Paranormal Romance/Wolf-Shifter Romance
ISBN: 978-1484996591
ASIN: B00BLVKNT0
Number of pages: 418 print
Word Count: 103,000
Cover Artist: Elaina Lee
Amazon  BN ARe
Book Description:
Wolf’s Haven
Caedmon Wolves, 1
Tamara would risk her life to gain freedom. She’s finally built up the courage to escape from a world of abuse by the hands of man who promised her the world. One night she makes a break for it, but her plans backfire. She begins to believe that she was never meant to be happy. When all hope of freedom fades, she stumbles across a wolf that brings her to safety. She learns to trust the wolf, but has yet to trust the man. 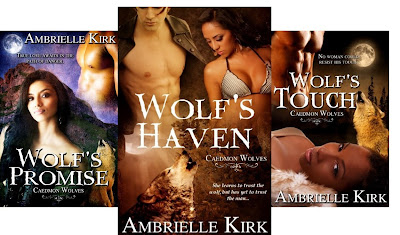 Wolf’s Promise
Caedmon Wolves, 2
Selene is thrust into the aftermath of Caedmon pack rivalry when determination to help a friend leads her to the foothills of the Virginia mountains. She doesn’t anticipate that her generosity would earn her a place behind bars and at the mercy of man who saves her from a sentence worse than death. Soon she discovers that Nick is far from ordinary. Under the façade of his commitment to protect her from evil hides a secret that shatters her faith in him.

Nick knew his life would be forever changed when Devin, the new Caedmon leader, honors him with the title of Second-in-Command. With this responsibility, he’s introduced to a web of pack politics and threats. Darius, the banished wolf who lost the most coveted title within the pack, turns out to be a sore loser, and he demands either complete dominance or total destruction. Someone must stop him before he tears down the unity that has held the pack together for decades.

In the midst of it all, he meets a tempting brazen beauty. Selene is not just any woman, and the wolf inside reminds Nick of this fact every time she’s in his presence. She awakens raging passion within him, and he desires her like no other. Nick’s past misfortunes has taught him many things. For one…never trust a woman with his heart.

True love awaits in the path of danger, but will Selene and Nick let the chaos destroy their bond?

Wolf’s Touch
Caedmon Wolves, 3
Jayson Truman is captivated by his boss’s daughter. He finds himself fantasizing about the many ways he’d like to have his way with Arianna Klein. Despite Mr. Klein’s strong connections to the Caedmon community, he and Jayson have never seen eye to eye on any matter. Lusting after his daughter only adds fuel to the flames. Their long-standing business relationship begins to unravel. Secrets are exposed, and loyalty is tested. Jayson is warned to stay away from Arianna…

Cutting family ties seems like Arianna’s only recourse to regaining control of her life. Yet, steering clear of her father is easier said than done, especially when she holds the key to his business’s success…or failure. And as if her life weren’t dictated enough by men with oversized egos, add Jayson to the equation and his many attempts to lay claim to her. If he thinks she’s going to swoon at his feet like a sex crazed maniac, he’s got another thing coming. But Arianna is not the only one with a key. Jayson may very well be the pawn she needs to get her out of the mess that her father has built.

Jayson will put his life on the line for Arianna, but will he gain her love and acceptance in return?

About the Author:
Multi-published author Ambrielle Kirk writes erotic, paranormal romance, and urban fantasy. Ambrielle lives in Atlanta, GA where she works in the accounting and finance industry. She holds a Master’s Degree in Accounting. Since graduation she’s worked in the public and private accounting sectors. She is the wife of a loving husband, and the mother of a beautiful girl. She works and writes full-time.  A bestselling author in several sub-genres at ARe and Amazon, she has also earned a 2012 Swirl Award in the paranormal category. She’s a member of RWA, FF&P special interest chapter of RWA, and co-founder and treasurer of Cultural, Interracial, and Multicultural special interest chapter of RWA. Ambrielle Kirk is also an admin at the blog, IRMC Books.
Webpage http://ambriellekirk.com
Blog http://ambriellekirk.com/blog.html
Facebook Personal Page https://www.facebook.com/ambrielle.kirk.9
Facebook Fan Page https://www.facebook.com/AuthorAmbrielleKirk
Twitter https://twitter.com/AmbrielleKirk
Goodreads http://www.goodreads.com/author/show/4139446.Ambrielle_Kirk