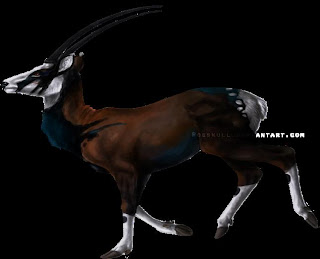 One of the challenges to a fantasy or sci-fi writer is to create a world that is familiar and yet alien – strange enough that the reader is not pulled back to Earth and yet not so bizarre that they cannot picture what it is you describe and you lose them in the first ten pages.

Since the colonists of Verdantia come from Nuovo Terra (New Earth) and settle on a very earth-like planet, they have brought many earth animals 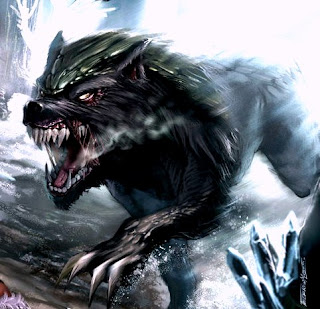 with them. Scythe-horned klipspringers populate the deserts of the Oshtesh and one of the most fearsome of creatures  is the Fellwolf – a genetic combination of wolf and great lizard. I picture them something like this.
Now, having given my readers some example of how I visualize these creatures, I hope I haven’t limited you!
It has always been my experience that imagination can paint a much more vivid picture in the mind than a thousand illustrations.

**Excerpt**
The potent aphrodisiac enveloped Fleur in a dizzying swirl as she swallowed the last of the jeweled goblet’s contents. It tasted of wine, cinnagin and musk. The heavy door to the ritual chamber opened. A scarlet-robed man strode through, pulling the door closed behind him. He halted abruptly, standing motionless, fixing her with a long stare before lifting an ironic eyebrow.
“You are my partner? You are tiny. I could break you.”
His rich baritone vibrated in her feminine places. Her senses rioting, she inhaled the clean scent of lingnum soap borne on a waft of air. Her senses reeled under the masculine assault of the warrior standing before her. His robes indicated a seventh-level magister of advanced magicks. His scarlet robe of office loosely draped a tall, broad-shouldered, spare body. Warrior braids at his temple swept back heavy, shoulder-length, auburn curls, leaving his high cheekbones and strong jaw in clean profile. His hazel eyes regarded her with the intensity of a great hunting cat. You are a very large man.
Fleur stood as tall as her five-foot-nothing would allow. “I am sturdier than I look.”
Her eyes wandered over the height and breadth of him. Patricio is right. He has a physical presence. “The docenti told me that under the influence of cinnagin, I would happily service a bald-headed cave troll. You, sir, are not a cave troll.” He looked taken aback, then just snorted.
A sudden flush sent her equilibrium reeling. “This aphrodisiac is affecting me strangely. I feel a little—dizzy.”
Swaying where she stood, her gaze shot up to him as he moved silently to steady her. His large hand felt calloused and warm against her upper arm. A strange course of electric sensation pulsed between them. My mind is playing games with me.
His other hand held leather cuffs and lashings. She was unable to hold his amber gaze, unwilling to betray her precipitous arousal and mounting fear. Trembling, she stepped out of his gentle hold. Without thought, she rubbed her arm where his touch had sparked that strange electric tingle.
Fleur moved to the glazed window overlooking the profusely blooming courtyard below. Some young children laughed gaily as they pursued each other around the central fountain in a carefree game of tag. Such sweet innocence. It reminded her why she was here. She wanted to give them a lifetime of carefree days.
“You know we must succeed.” Fleur carefully placed the goblet on the sill and steadied herself, bracing both hands against the framing, her heart suddenly racing, her breath coming in short pants.
“Yes. I am aware of the stakes.”
She threw a glance toward him, at his dry, sardonic response. Her thoughts spun frantically. What do I know about House DeTano? They are superb horsemen. “I don’t remember seeing you at court,” she said.
“Before the invasion, I lived off-planet for a number of years. I came back to fight for Her, for the Senzienza, and for my people.”
Fleur straightened in astonishment. “She has spoken to you? The Senzienza, Verdantia, has spoken to you?”
He inclined his head slightly. “Yes.”
“I’ve never met—.” She shook her head. “Later.” He is vastly more than he seems.
Fleur glanced nervously to the leather cuffs held in her magister’s surprisingly elegant hands. “Being bound is difficult for me. But I will submit to you.” His head tilted in question, and then his hazel eyes softened.
“Most certainly, you will submit to me. I have performed the Great Rite many times, my Lady and though I would spare you, the binding is necessary.”
She could not control her trembling. He moved to stroke her bare arms in reassurance. Again, that strange sensation pulsed through her.
“Don’t fear me. I’ll take care with you,” he murmured.
Don’t fear him? Heat from his body engulfed her. Her skin tingled where his calloused hands caressed her arms. She didn’t understand why his erotic pull was so strong. It must be the cinnagin.
His hard thighs easily trapped her against the marble windowsill as he gathered her hair aside to pull at the golden cords holding up her gown. The firm length of his arousal pressed into her back. She heard the catch in his breath as he bared her. The warmth of his whispered, “By the goddess, you are exquisite,” flowed across her shoulders. “Lady, you have no conception how cruel the next few hours will become. We cannot rely solely upon your self-control, for in every way you must submit to me.”
His baritone voice rumbled through her. Now it begins. She would risk anything for even a chance of success. “Yes. I submit. Everything depends on it.”
“Yes, everything.” He nipped her shoulder then gently kissed the sting away.
“I am going to caress every part of you and keep you aroused until the crystals sing with power. The longer you stay at the edge of climax, the faster the crystals can draw on your energy. Sometimes it takes merely a day to replenish their power. If you should go over, I will bring you right back up. As long as you are able, you must deny yourself or tell me when you approach your peak. Do you understand?”
“Yes,” she whispered. “And when I can no longer discipline myself? If I am beyond self-control?” She gasped in air, her heart pounding in her ears. “What then?”
Swaying, unsteady on her feet, her eyes were drawn to the implements hanging on the far wall—whips, paddles, manacles, bars and others she could not identify. Her fear spiked upward.
“Then I will bring you back up, repeatedly.” He had followed her gaze. The corner of one lip quirked up and his amber eyes narrowed wickedly. “By whatever means necessary.”
At this, her knees buckled. If the conte had not been quick to catch her, she would have shared the floor with her robe, then all went dark.
Book Trailer: http://youtu.be/sRt_mpFuenc
Amazon   Goodreads   Kobo

Patricia A. Knight is the pen name for an eternal romantic who lives in Dallas, Texas surrounded by her horses, dogs and the best man on the face of the earth – oh yeah, and the most enormous bullfrogs you will ever see. Word to the wise: don’t swim in the pool after dark.