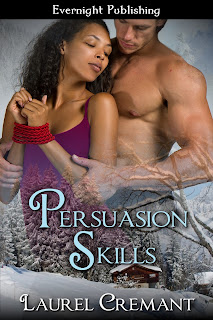 Book One
Laurel Cremant
Genre: Contemporary Erotic Romance
Publisher: Evernight Publishing
ISBN: 978-1-77130-473-3
Number of pages: 107
Word Count: 31, 000
Cover Artist: Sour Cherry Designs
AmazonUS   AmazonUK
AllRomance   Bookstrand
Evernight
Book Description:
In the aftermath of a major health scare, Pepper Holts makes the relief-inspired decision to seize the day. Unfortunately, most of her “seizing” involves a bit of merlot and her best friend’s pants! After a shared night of passion she realizes that her feelings for Jax are a lot more complicated than she ever thought.
Jax has finally realized that his allergy to marriage has nothing to do with the institution itself, and everything to do with the women in his bed—or more specifically, the one woman not in his bed. Her reaction to their one night together has him scrambling to regroup. So he does what he knows best—he disappears, and he thinks. The plan?—convince Pepper into staying with him at a secluded cabin for one week. One week of pretending to be a happily married couple to show her how great they could be together.

“Hell, Pep, I missed you,” he said before dragging her from her chair into his waiting lap.

He dipped his head to the crook of her neck and engulfed her into a tight hug.

There was nothing quite like a Jaxon Grey hug. He hugged with his whole body. His tall frame and broad shoulders always curved just right around her, immersing her in a mantle of warmth and shelter.

She dipped her head and rubbed her chin onto the top his head and closed her eyes.

His resulting rumble of laughter caused his chest to shift against hers, and just like that, her back stiffened in addition to a few other things along her body.

She bit back a groan as her nipples tightened against the lace of her bra.

The warm gust of his breath against her neck wasn’t helping matters either.

“You’re such a sweet talker,” he said. “And since I like you so much, I promise not to spank you for your bad behavior.”

He pulled her in tighter and began to rub the base of her back. His stroking hand was far from soothing as it settled low, and his fingers grazed the swell of her ass. All it did was remind her of how good his big hands had felt stroking her naked flesh.

She shifted uncomfortably on his knee, trying to scoot away from the heat of him.
“I’m sorry, but I left my Emily Post handbook at home.”

He lifted his face from the crook of her neck and drifted his hands lower. Holding on to her hips, he dragged her forward and caught her gaze with his.

“Really? That’s too bad. Chapter six is dedicated to the perfect way to drape yourself across a man’s lap. Feel like practicing?”

Both his suggestion and hooded gaze held her captive for a few silent seconds. The idea of his strong hands spanking her ass flushed her body with heat.

The thought of him holding her down at his leisure and pleasure was surprisingly arousing. She knew that Jax liked to control things in bed, but how far did his need for dominance go?

“I’ve been doing a lot of thinking.”

He continued speaking as if he hadn’t just casually filled her mind with raunchy goodness. She tried not to pout before responding.

“It is what you’re known for,” she said, trying hard not to stare at his mouth. Her clit was already warming at the recollection of what that mouth could do.

She yelped at the pinch he gave her hip.

“Jax, you can’t expect to fill the void your mom left with things. It’s just gonna take a little time to heal.”

“I’m not talking about things, Pep.”

He smoothed a hand up and began to rub the nape of her neck.

“Mom was always pestering me about settling down and starting a family, but I always thought there was plenty of time. You know me. I’ve never been one to believe in love and marriage.”

Pepper tried not to flinch at his words. Jax had always considered love to be an illogical emotion. He always joked that it was just nature’s chemical drug designed to propagate the species. His outlook on love was one of the reasons why she had always been able to avoid acting on her attraction to him. There was no use ruining a perfectly good friendship for Jax’s idea of a romantic relationship.
His words only served to remind her that falling in love with him was a lost cause.
“But, ever since the funeral, I’ve realized she was right.”

It took a few seconds for his words to sink in.

“Uh, what exactly was she right about?” she asked, confused at his line of thought.

“She was right. I should be thinking about getting married and starting a family,”

“What? Okay, who are you, and where have you hidden the real Jaxon Grey?” she said, laughing desperately, and hoping this was his version of a horrible joke.

The look on his face sobered her up quickly.

“No. I’ve analyzed the situation and determined that my mother was right. So I’ve decided to get married,” he said.

The words came out of her mouth in a whisper of disbelief. Married? Married?

“Yeah, married. And I’ve concluded that you would make me the perfect wife,” he said before pulling her head down and covering her shock-slackened mouth in a hot kiss.

Giveaway on Rafflecopter
About the Author:
Laurel is a romance author, who like most writers loves to read. Her first love (pun intended) has always been romance. From the sappy YA romance novel to the more risqué erotica novels, Laurel is a sucker for a good love story.
Laurel writes paranormal and contemporary romance and is a self proclaimed, out of the closet nerd. She admits that she can’t seem to avoid adding a bit of “nerdology” or “geek-dom” to all of her books. Living in Miami, she also admits that she can’t seem to avoid giving her heroines gorgeous shoes, “In Miami, we worship everything strappy, open toed and just plain hot!”
Website: www.LaurelCremant.com
Blog: www.laurelcremant.blogspot.com
Twitter: www.twitter.com/LaurelCremant
Facebook: www.facebook.com/LaurelCremantAuthor
Pinterest: www.pinterest.com/LaurelCremant