Skip to content
By A.C. James
Ramping up for its book tour that starts next week, I’m giving readers the chance to download my new release for free, today and tomorrow only. Enjoy! Do check out the tour schedule at the very bottom of this post. Follow the book tour for a special gift card giveaway, guest blogs, and other fun stuff. 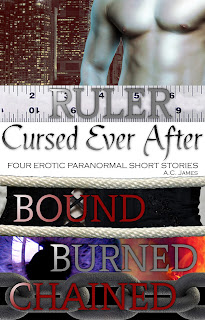 Kindle Download
Ruler – [Arie]
Arie is having a bad night but what else is new? When vampires deal with demons nothing less can be expected. He heads to the Hellfire Club to report back to his sexy boss, Tessa Green, anticipating that she’ll be less than satisfied with the details of his night. Instead he finds a hot new hire waiting in her office. Alone in the office, she offers him an intriguing opportunity to improvise.
Bound – [Luna]
Luna is always tied up in difficult situations. Obsessed with someone she can never have. From the moment Luna first met Victoria, she knew she was different—hot, dangerous, and unlike anyone she’s ever known. Luna can’t stop thinking about her. Can’t stop fantasizing about her. Can’t stop craving the one thing she knows she can never have. The one she wants—the vampire she wants abstains from blood and sex.
To distract her from her obsession, Luna begs Tessa to find an appropriate diversion. Bound and gagged in her dungeon at the Hellfire Club (HFC), Luna gets an unexpected visit from a sibling that leaves her feeling conflicted and heartbroken. Arie steps in when Luna is vulnerable. Is there more to this hot alpha vamp than his hard-ass facade?
Burned – [Victoria]
Victoria has a sordid past and this macabre tale is woven with lies, blood, betrayal, and vengeance. In the far north of France in the 1700s she took care of a young girl and her ailing mother. She never planned on falling for Henri in the process—except she fell in love with the wrong man. She fell in love with a monster. Sometimes evil hits too close to home. And when you trust the wrong person you might just get burned.
Chained – [Tessa]
Tessa Green is the most famous dominatrix in Chicago and rules the notorious Hellfire Club. She also happens to be a vampire. And the senator is just another toy for her amusement. Sometimes the power and authority that comes with leadership can be a strain. He relishes her dominance, her demands, and her control. Sometimes being free happens only when chained and who better to keep his secret than Tessa.
Plus as a special bonus you get a sneak peak at Eternal Ever After!
“Rich and dark, a supernatural and sensual delight of erotic passion.”
—Kathy Kulig, Ellora’s Cave Award Winning Author
ON TOUR STARTING MONDAY:
August 12 Interview
Roxanne’s Realm
www.roxannesrealm.blogspot.com
August 12 Spotlight
http://literarynook.com/
August 12 Spotlight
Let’s Start Saving Now –
www.letsstartsavingnow.com
Book Worm & More,
http://bookwormandmore.blogspot.com/
August 13 Guest blog
Erotica For All
http://eroticaforall.co.uk
August 13 Spotlight and review
http://romancewithflavor.com/
August 14 Guest blog
Darker Passions
http://darkerpassions.net/
August 14 Spotlight
Tanya’s Book Nook
http://tanyasbooknook.blogspot.com
August 15 Guest blog
Cloey’s Book Reviews and Other Stuff
cloeyk.blogspot.com
August 15 Spotlight
Reviewing in Chaos
http://reviewinginchaos.blogspot.com
August 16 Spotlight and review
Faerie Tale Books
www.faerietalebooks.org
August 16 Guest blog
Rose & Beps Blog –
http://rosebeps.blogspot.it/
August 16 Review
Sapphyria’s Steamy Book Reviews
saphssteamybooks.blogspot.com
August 19 Guest blog
Http://erzabetsenchantments.blogspot.com/
August 19 Spotlight
Storm Goddess Book Reviews
http://www.stormgoddessbookreviews.blogspot.com/
August 19 Spotlight
Smoldering Heat
http://smolderingheat.wordpress.com