Welcome to my blog interview with novelist JoAnna Grace. If you like what you read, please investigate her books on Amazon.

A.C. James: Hello, JoAnna. Please tell us something about yourself, where you’re based, and how you came to be a writer.

JoAnna: Hi! I’m an East Texas girl all the way. Lived in the same town my whole life. I’ve been writing since I was a child. I guess you could say I’ve always had an over active imagination. That left me with two choices: writing or medication. LOL! I think I went in the right direction with the writing!

A.C. James: LOL… Writing or medication—you’re hysterical 😉 What genre do you generally write and what have you had published to-date? What do you think of eBooks?

JoAnna: Romance is my main genre and I write various subgenres of that. I’m a sap at heart so anything with a good love story. Throw in some murder or magic and I’m set. My debut novel, Divine Destiny, is currently on sale and I have many more projects on the way. I love ebooks! I have an iPad that has both Kindle and Nook apps. It’s the future of the industry. I still like going to brick-and-mortar stores and feeling the pages in my hand, but we live in a digital age. I don’t think print will ever go away though—I hope not, that would break my heart.

A.C. James: Mine too but I have to agree that I’ve completely fallen in love with my Kindle. Have you self-published? If so, what lead to you to become an indie author?

JoAnna: Divine Destiny was going to be a self-pub. I’m a control freak so it was the most logical way to go. But I met my publisher, Progressive Rising Phoenix Press, at a conference and things escalated from there. I connected with their mission statement and their set up from the start. It’s exciting to see Divine Destiny among their titles.

A.C. James: Do you have a favorite of your stories or characters?

JoAnna: Eek! That’s tough. Avery is my girl. I relate to her more than my other characters because she’s a tough Texan! Ryse, the hero if Divine Destiny, will always be special. He was the first character that “spoke” to me and begged to have his story written. Some of my favorites are the characters that evolve the most, but are not the leading roles. Yankee, he’s grade-A jerk but he has his reasons. Hanna, she has a minute role in DD but she recently introduced herself to me and I think she is going to have a major role of her own down the line. See, I can’t pick just one.

A.C. James: Tough Texans have a soft spot in my heart too. My father lives in Conroe, right off the lake. Which authors did you read when you were younger and did they shape you as a writer?

JoAnna: I was an official member of The Babysitter’s Club. Those are the first ‘big girl’ books I remember. That’s where my love for reading and writing started. Along my teenage years I lost touch with reading, but never writing. I picked up the reading again as an adult and lived off of YA vampire books for a couple years! I hope that they have shaped my writing to mimic their styles. It would be an honor to be compared to the great paranormal authors of our day.

A.C. James: Do you manage to write every day, and do you plot your stories or just get an idea and run with it?

JoAnna: I try to write something every day. Often I have characters that will not shut up until I’ve dictated their stories. Sometimes that means working on what I’m supposed to be working on, and sometimes it’s off in left field. There is a small amount of plotting. With any series it’s necessary. However my characters have the tendency to surprise me and I love that. If the story arc allows, I run with it.

A.C. James: And do you do a lot of editing or research?

JoAnna: I researched the Greek gods for Divine Destiny. One of the things I love about fiction is that I took the things I liked and made up the rest. Woohoo. For my contemporary stuff and anything written for the real world I do check certain things out. The more I know about a setting or event in history the better the story will be.

A.C. James: What point of view do you find most to your liking: first person or third person? Have you ever tried second person?

JoAnna: Third person. If I’m having problems conveying a character’s reactions I’ll write the scene in first person just to help me get in their head. Then use that to go third person.

A.C. James: What’s your favorite / least favorite aspect of your writing life? Has anything surprised you?

JoAnna: Favorite- Those moments when characters surprise me and the pieces fall into place. Least Favorite- Synopsis. They are evil. I am surprised at how technically inept I really am! I thought I had this whole inter-web thing in the bag… not so much. LOL!

A.C. James: Are you involved in anything else writing-related other than actual writing or marketing of your writing?

JoAnna: I recently became the coordinator for The Indie Road. It’s a conference dedicated to helping authors navigate the indie/self-pub/small press road to publishing. I’ve learned a lot over the last year and it’s my passion to share that with other authors and this conference is aimed at exactly that.

A.C. James: That’s fantastic… I’m a big supporter of Indie. Are you on any forums or networking sites? If so, how valuable do you find them?

JoAnna: I’m glued to Facebook! I Tweet when I can. And I blog when I remember the dang thing. J (this goes back to that technologically inept statement). I’m on Google+, but never check it. For me, Facebook is the best way to keep up with my people and get the info out. I hear so many authors that spend hours a day updating this network and that page and blogging everything. I do what I can in the time that I have! LOL!

A.C. James: What are you working on at the moment or next?

JoAnna: I’ve just finished the first draft of the prequel novella for Divine Destiny. Editing to follow. And The Blake Pride shapeshifter series is about ready to go.

A.C. James: Tell us more about Divine Destiny and why it’s been such a big hit with your readers.

JoAnna: This story starts in the middle of turmoil! From the first page it’s chaos and it keeps going from there. Amongst all the insanity is a love so strong and powerful that not even the gods can stop it. That level of devotion is attractive to everyone.

A.C. James: Where can we find out about you and your writing?

JoAnna: Visit my website: www.authorjoannagrace.com for all you need to know. Also, please drop by on Facebook and say hi! I love meeting new people!

A.C. James: Thank you for interviewing today on my Paranormal Passion blog! Good luck with The Divine Chronicles and the Blake Pride Series; we look forward to having you back when it’s released. 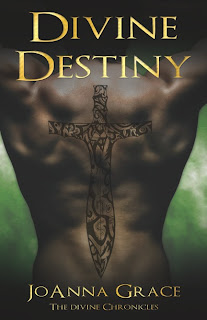 Divine Destiny
About the Author

The Divine Chronicles
JoAnna Grace
Publisher: Progressive Rising Phoenix Press
August 17, 2013
ASIN: B00EN0TV44
Print Length: 229 pages
The gods work in mysterious ways…
Avery McClain is normal. Or so she thinks.
Until her life is shattered and she is rescued by a Thracian warrior. He takes her to the Haven, a realm of safety for the magical race of Olympians. There she discovers her life was meant for a higher calling as the mate of an Olympian Prince.
Her choice will change everything.
Ryse Castille has one job: convince Avery to step into her role as a Divine Grace. As with any mission, there are obstacles to overcome. Including the fact he is captivated by her. Of all the gifts the gods have given him, romance was not included. But Avery belongs to him and he will stop at nothing to protect her.
The enemy might be closer than they think.
Can Avery find the courage to embrace her destiny? Or will evil separate them for eternity?
Amazon         Smashwords 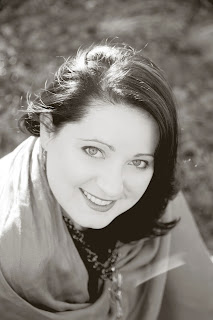 JoAnna Grace lives in a world of alpha males and strong females where true love conquers all—at least in her mind!
From the time she started holding a crayon she began to create magical worlds. Her first book was a series of pictures about a puppy princess. The story changed each time she told it, but there was always a happy ending! Her first written story was about girls who changed into tigers.
Hmmm… Guess some concepts stick around even into adulthood. Now those stories have become a bit more complex!
JoAnna’s tales are spun at her home in East Texas where she lives with her husband, three kids, a couple dogs and a few fish. When not hiding behind the computer screen you can find her camping, boating, and shopping. She is active in community ministry where she hopes to pass on the blessings she’s been given.
Member of the East Texas, North Texas, FFP, & PRO chapters of RWA, Texas Association of Authors.
For more paranormal romance readers, JoAnna loves to hear from fans! You can find her at the following places:
www.Authorjoannagrace.com
www.Authorjoannagrace.blogspot.com
https://twitter.com/JoAnnaGrace4ya
https://www.facebook.com/JoAnnaGraceAuthor