Skip to content
By A.C. James
About Ambrielle Kirk
Multi-published author Ambrielle Kirk writes erotic, paranormal romance, and urban fantasy. Ambrielle lives in Atlanta, GA where she works in the accounting and finance industry. She holds a Master’s Degree in Accounting. Since graduation she’s worked in the public and private accounting sectors. She is the wife of a loving husband, and the mother of a beautiful girl. She works and writes full-time.  A bestselling author in several sub-genres at ARe and Amazon, she has also earned a 2012 Swirl Award in the paranormal category. She’s a PAN member of RWA, FF&P special interest chapter of RWA, and co-founder and treasurer of Cultural, Interracial, and Multicultural special interest chapter of RWA. Ambrielle Kirk is also an admin at the blog, IRMC Books.

To give you a taste of Ambrielle’s writing:
***Excerpt from Chapter One***
“Are you in… or are you out?”
Tamara glared at her fiancé. The demanding expression on Brad’s face was the same exact look he gave her when he wanted something. Only this time, no physical force followed. After all, they were surrounded by his partners in crime. He wouldn’t dare lift a hand to strike her around other people. Brad wanted no one to see how much of a coward he was.
Swallowing, she bit the corners of her lips. She’d waited for this opportunity for months. The chance to be free of the conniving bastard and the controlling dangerous life that he’d tricked her to lead.
Her plans were already in place. All she had to do was make one call and her contact would be waiting. She would be free from this life.
“Yes, I’m in.” Her voice came out on a hoarse whisper.
“A ride or die chick.” One of Brad’s friends chuckled. “What does a guy have to do to get one of those nowadays?”
Brad grabbed the duffle bag at his feet and grinned. “It’s an acquired skill.”
If they only knew. Brad Thatcher wasn’t the man he portrayed himself to be. Over the last ten months, he’d turned to heavy drinking each night. Then the verbal abuse turned to something much worse. She had something to show for being so vulnerable. The bruises on her skin. Now, she feared for her life. This situation had gone too far.
Tamara had never envisioned being with a man who seemed to thrive off her pain. He was never going to get better. Her counselor had warned her of this. She’d even ticked off the list of warning signs to watch for his behavior. Throwing jealous tantrums if she so much as looked at another man. Trying to control her every move and keeping her under lock and key. Verbal insults escalating into gripping her in a fit of rebellious rages. One after the other, the signs became clearer. Brad was an abuser. Of women, drugs, and alcohol. Yet she stayed.

The best paranormal writing mixes real life with a hint of supernatural. Ambrielle’s ability to tackle domestic abuse may be tough for some readers to swallow but I applaud her for talking about an issue that often gets covered up under lies and layers of liquid foundation. Again, she’s giving away five copies of Wolf’s Haven in my Red, White, and Wolf Giveaway. 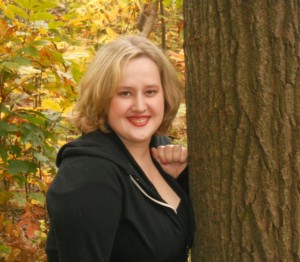 Carrie Ann Ryan is a bestselling paranormal and contemporary romance author. After spending too much time behind a lab bench, she decided to dive into the romance world and find her werewolf mate – even if it’s just in her books. Happy endings are always near – even if you have to get over the challenges of falling in love first.

Carrie Ann’s Redwood Pack series is a bestselling series that has made the shifter world even more real to her and has allowed the Dante’s Circle and Holiday, Montana series to be born. She’s also an avid reader and lover of romance and fiction novels. She loves meeting new authors and new worlds. Any recommendations you have are appreciated. Carrie Ann lives in New England with her husband and two kittens.
Carrie Ann loves hearing from readers:
Website – Blog – Facebook Author Page – Facebook Friend – Twitter: @CarrieAnnRyan – Goodreads – Pinterest – Diamond Authors – Newsletter – Email

Here’s an excerpt from The Redwood Pack Volume 1 as a little teaser. As a reminder she’s giving away 15 e-book copies in my giveaway this week:
**Excerpt**
She stood back and closed her eyes, conjuring the memory of her mystery man’s face. The image that filled her mind made her forget the lack of human contact. The thought of his deep, husky voice tickled her spine whenever he spoke. Green eyes caught her in his web with only a glance. She had fallen for a stranger and didn’t even know his name. He would come into her store every morning and order a cinnamon roll and coffee with only a few words. Then he would pay cash before lifting up the corner of his mouth in a semblance of a smile and walked out of her store. Was it strange she worried he’d keep walking and never return?
A bell’s tinkle pulled Willow from her reverie and self-pity. As she turned to greet her customer, her heart leapt to her throat. Him. Her mysterious fantasy. As she tried to regain her senses, she took all of him in. He had to be one of the tallest men she’d ever seen, easily over six and a half feet. The tight black T-shirt he wore hugged his biceps and cut into his muscular physique, while his broad shoulders stretched and strained the seams. His body tapered down to a narrow waist and hips as they met his thighs. His long legs were encased in worn jeans leading to work boots. Hmm, construction perhaps? She glanced back up his body to his striking face. He wasn’t beautiful, but he did have a face women dreamed about. A strong jaw and cheekbones gave him an aura of strength and protection. Hair was midnight black and long enough to brush his shoulders. However, today, a band held it back, showcasing his face more. He studied her, his green eyes calm and calculating. Willow let out a surprised gasp at the sexual heat radiating from him. Could she possibly be imagining things?

If you haven’t entered for your chance to win this along with tons of great prizes from other fantastic authors, I suggest you stop by and share your favorite alpha wolf in my Red, White, and Wolf Giveaway. Please note that if you already entered, I sincerely apologize but I had to do a few changes to the giveaway due to the number of copies available. Still there are three fantastic prize packages and the potential for 45 lucky winners! You could be one of them 😉